In July we placed an order for arguably the most basic Challenger Hellcat possible. The car is set to be delivered with nothing more than a manual transmission, summer tires, orange brake calipers, hood pins, and the widebody package - all in a plain white wrapper. Nothing else. Cloth seats, no butt air conditioning, no nav, no convenience packages, no sunroof, no stickers, no premium stereo, no nada. Making the car a pure modern muscle car. 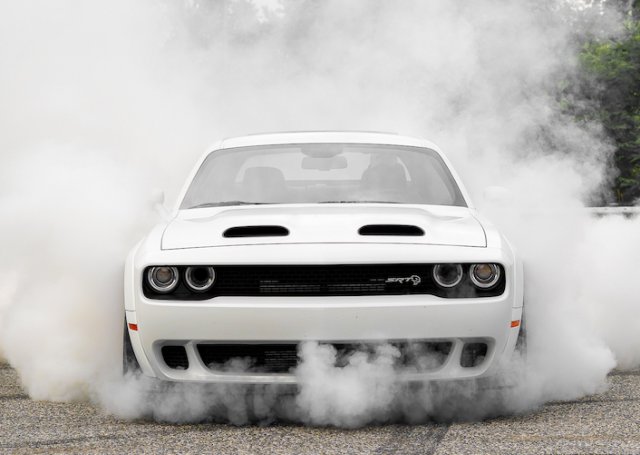 The goals are to run 10.9s on stock power, be an autocross beast, do some half-mile runs (hence the hood pins), and lots of road trips with the family.

The car is supposed to leave the factory tomorrow... until then I'll just stare at my VIN.
Last edited: Aug 28, 2019
Obviously, your ambition outweighs your talent.

Sounds like an awesome package. Well done. Pictures when you get it.

Markp said:
Nice! Rear seat delete?
Click to expand...
Only when I take it out, passenger seat too. Chose this over a 2015 Z28 because it is more family friendly. I can do a 10% weight reduction in this car before taking a penalty with my club - that is 400+lbs. I have some ideas to make the most of that rule.

Hood? Who needs a hood!
Obviously, your ambition outweighs your talent.

I'm sub'ing in on this . Looks interesting.

You’ll have no problem hitting 10.9
OP

We all know how formidable the Hellcats can be on the drag strip and on cruising out on the highway. But, what in the world possesses a person to believe that a HC Challenger can be a half-way decent autocross car? Well, a lot of it is in the numbers and below the surface - plus a little risk management.

I am going to break this down based on my experience, the numbers, and a little educated guesstimation.

My experience:
I've driven nothing but big over-powered American cars throughout my autocross "career". I've never raced a small car with a short wheel base and balanced power. Nope, just good old mullet machines - some way worse than others.

'91 Z28 with a really warmed up TPI 305 with a 5 speed on three different brand tires and a completely blown suspension.

Some days it doesn't go your way:

I have yet to get my wagon out (most of the running gear came out of my wife's B4C).

The point here is that over a decade you gain a lot of experience racing any car, but learning how to handle a crappy chassis well before progressively moving up to a better car/parts pays dividends in the long run. You absolutely could step into a built car and run decent, but you will never really know your limitations. So, having confidence in autocrossing a big car like the Challenger is not an absurd proposal for me.

By the numbers:
As I mentioned previously I had considered a 2015 Z28 (https://www.caranddriver.com/chevrolet/camaro-z-28/specs) which is very comparable to the widebody Challenger (https://www.caranddriver.com/dodge/challenger-srt-srt-hellcat/specs) in length, wheel base, width, track width, tire width (not compound, easily rectified) etc. Obviously the weight, CG, and suspension configurations are going to differ - but, how much in the hands of a relative novice is not enough to worry about when you run for fun in club racing. If it bugs you that much you are either a real race car driver or an asshat racing spec sheets - in either case the Z28 or HC are not the car for you so move on with your life.

Spring rates, sway bars, and shock design are a big deal in managing a tubby machine. Dodge gets this with their factory suspension tuning. Note the change between the standard HC and the Scat Pack widebody spring rates in the back - there was obviously something to be gained there (especially compensating for the SPWB's hollow sway bars; lighter yes but offering a lower rate). Keep in mind that the SPWB has less sprung mass to control so the HCs big spring/big bar vs. SPWB big spring/biggish bar combo is probably nullified in this situation. Note, there are no comparable lap times offered up by Dodge between the HCWB and SPWB for a reason - the difference is marginal at best. 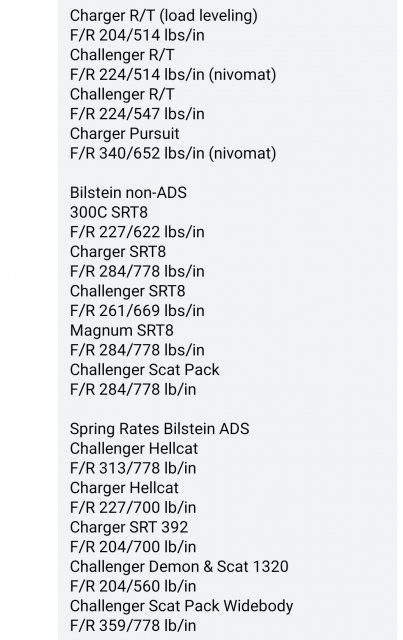 I've been in touch with the dealership responsible for my order and sent them my desired suspension settings to be changed prior to me taking possession. Front -1.5* camber, 9.5* caster, .25* total toe in and rear -0.5 camber and 0* total toe. These settings are within the factory acceptable ranges and will make the most of the suspension in a stock configuration - which is a requirement to avoid taking points penalties in my class (more on this in a minute).

The lot I currently race in has the capability to reach speeds of about 60 mph in very short bursts - meaning that this is a "first gear" track in a stock M6 HC. The manual transmission comes in handy as autocross can leave an auto searching or with contemporary short geared transmissions choosing the closest gear. Ideally, I'd have some 4.10s and dump it in second.

Risk management 101:
This brings me to why the Challenger HC is a good choice (despite a few inherent compromises) for autocross. SCCA classes the Challenger HC as F Street (which coincidently is where my Buick started before the mods) - in my local club the Challenger HC becomes D+12; for the sake of comparison the SPWB is classed as B Street (2015 Z28 is A Street) which is a huge hit when you see what it is up against. The trouble is that being remotely competitive was always a challenge in my Buick as the mods pushed it into A or Prepared classes and it... I... got tromped. So think about it, the Challenger HC sits square on 305 tires, 700hp (overkill), modern adjustable suspension aaaaaand I can still pull 400lbs out of the car. You can see the other cars it stacks up against here: https://www.scca.com/downloads/45362-2019-04-11-street-category-by-manufacturer/download it is a hilarious dumping ground of cars. Most of which never show up - so it is mostly Civics and Miatas - so it becomes a driver's race. A few minor mods would only move the HC up a class - I've done the math and it won't be worth it for a while; and if I am successful, the club rules will get rewritten.

Fast is smooth, smooth is fast. Even on a rhino.
Obviously, your ambition outweighs your talent.

Motorhead, interesting phrase, mullet machines.
I think with Chrysler's history(sponsored Beverly Hillbillies, Dukes of Hazzard, Joe Dirt,and the list goes on) there is a good chance that the guy you see driving a Challenger is going to have a haircut that says business up front, party in the rear!

Motorhead,
I am going to order a "basic"HC also but getting the A8 for straight line vs autox.
Just curious, why the painted calipers and hood pins?
OP

Decay said:
Just curious, why the painted calipers and hood pins?
Click to expand...
Painted calipers are a "no cost" option in Canada - and I wanted a white, black and orange themed car as a nod to Landy's "Boycott" Challenger: And the hood pins are an added layer of security during half-mile runs as these cars have shown a tendency for underhood lift. Plus, I f*cking love hood pins, and the sales code MJL are my initials (it was a sign!).
Obviously, your ambition outweighs your talent.

Pulling the weight (from an already light HC) will get you that 10.9 for sure.
I don't know how many stock power M6s have ever run 10s.
OP

Jack_Toepfer said:
Pulling the weight (from an already light HC) will get you that 10.9 for sure.
I don't know how many stock power M6s have ever run 10s.
Click to expand...
Someone has to be dumb enough to try, right?

Here is a fun little exercise when choosing an autocross car: Looking at where is everything placed in the chassis.

1. The relationship between the forward most cylinder and the centreline of the front axle. Obviously anything forward of the axle centerline is a disadvantage (and contributes to the 57/43 weight distribution problem). The green lines show the relative location of the top of the engine (noting that in blue the supercharger adds about ~70lbs on top of the engine and forward in the core support);

2. Estimating the centre of gravity. Visually speaking the driveline assembly sits reasonably low in the chassis - and a lot of it is sprung mass. I'll have to revisit this later; and

3. Balance. I find it interesting that the fuel tank(s) are forward of the rear axle assembly and not hanging way out back like most of the cars I am used to. Definitely one of those times where keep the tank full may have its advantages when tossing the car around. But, I can tell why people throw weight in the trunks of these things for traction in a straight line.

Obviously, your ambition outweighs your talent.

Love the poverty hellcat, thats mostly what i plan on doing for mine way down the road
OP

Hpindy said:
Is the "poverty pack" an option for 2019?
Click to expand...
It is if you know what boxes not to tick. But, yeah - Dodge de-optioned the cars for 2019 and that lowered the price of entry by like $8K from the 2018; that was the difference maker for me.
Obviously, your ambition outweighs your talent.

motorhead said:
It is if you know what boxes not to tick. But, yeah - Dodge de-optioned the cars for 2019 and that lowered the price of entry by like $8K from the 2018; that was the difference maker for me.
Click to expand...
I was trying to be a smart a$$ lol. When I ordered my car I "ticked" 2 boxes . Brass monkey wheels ($695) and plum crazy paint ($50) . There were not many options in 2018 . I like the fact you option up or down now . I even like the "hounds tooth" seats you can get now ( base seats) .... Now you mentioned something about a mullet option earlier . Does that package come with curb feelers, crager Ss wheels , and "diamond pattern interior?

Hpindy said:
I was trying to be a smart a$$ lol. When I ordered my car I "ticked" 2 boxes . Brass monkey wheels ($695) and plum crazy paint ($50) . There were not many options in 2018 . I like the fact you option up or down now . I even like the "hounds tooth" seats you can get now ( base seats) .... Now you mentioned something about a mullet option earlier . Does that package come with curb feelers, crager Ss wheels , and "diamond pattern interior?

Btw I seen you even have the " poverty star" rims ready to go .lol
Sent from my BBF100-2 using Tapatalk
Click to expand...
They even include a complementary White Snake cassette and a sleeveless Iron Maiden t-shirt. We actually have matching "hounds tooth" car seats to go in the car.

And, yes this car is going to be an exercise in value engineering. Just wait until I start building parts for it - got my new plasma cutter in the mail last night.
Obviously, your ambition outweighs your talent.

Sweet . My audiovox cassette deck chewed up my las white snake cassette the other day so I need a new one .
I like unique builds so I will be following along .