When I picked up my 2016 HC Charger back in March, I had read there was a simple upgrade to add heated/cooled cup holders (Part# 1PB67DX9AD) like those seen in the 300C. After some research, I found what I needed and ordered and installed the cup-holder for my car. For this mod, the Red (heating) and Blue (cooling) rings do not light up when the cup-holder is on. The normal ring illumination works when the parking or headlamps are on though, but that is turned off when you place the cup-holder into either heating or cooling mode.

The harness is plug and play, but you do need to cut gray wire as indicated on the cup holder harness, and splice it onto the orange wire using a tap splice connector -- about 1/2 way before plug. This gives you room to insert the gray wire into the tap splice connector, along with the orange wire and squeeze it with a pair of pliers. You fold over the blue flap on the connector after you squeeze the metal tab.

The steps to open up the console are:

1. Pop up the trim ring that surrounds the shifter. I start from the rear of that bezel.
2. Pop out the two side wings on the console which sit next to the shifter bezel. They will pop out towards each seat and you can see the clip on each side once the shifter bezel is removed.
3. The cup-holder trim piece is the most challenging piece. It uses two rear metal spring clips and two front manual release plastic clips. The front clips are a bit of a pain, but do not pry up on the front. There are two rectangular access holes which can be used to access the release on those clips. I used a 90 degree pick tool. You must push the little plastic tang towards the rear of the car just the right amount while gently lifting up on the trim piece. You must do this on both sides and it can be a pain! If you stick your finger in those access holes, you will feel the piece that moves. Then you lift the console lid and pop the back the back of the cup-holder trim piece up to release both clips. Here's something to watch out for. The rear metal clips actually slipped off the trim piece and fell inside of the console. They are green in color and if your trim piece doesn't have them still attached when removed, you'll have to go hunting for them deep in the console after removing the cup-holder assembly.
4. The cup-holder is held in place by six screws. Remove them and then remove the sliding door assembly. It may require a little tug to get it to slip out.
5. Remove the screws and pop up the rear section of the cup-holder first. Then you can remove it fairly easily.
6. Installation is just the reverse order.

The cup holder can be modified prior to starting the project, so it's just as plug and play as any other write-up.

The electrical plug in the car is anchored with one of those plastic push-in connectors. All you have to do is pry that plug upwards and leave it un-anchored so that it will reach the plug on the cup holder assembly. The most difficult part for me was removing the cup holder trim piece. Once I got a 90 degree tool on the passenger side to release the little latch it was a breeze. Also, don't forget to retrieve the 2 green metal clips from inside the console and reuse them on the trim piece.

Removing the shifter trim: This part is pretty simple, simply lift the rear edge of the Shifter trim and pop it up. Anything thin and preferably hard plastic will do best here. I actually used a LEGO Brick Separator and it worked fantastic for the whole project with no scratches.

Releasing the Center Console: Once the Shifter trim is up, you can pop the left and right sides of the lower console away. It takes a little force, but the clips are solid and won't come apart. This photo is so you can see what you are releasing.

Removing the cup-holder trim: This is the step that can be a pain. There are two rectangular holes under the Shifter trim to the rear. Down in these holes are tabs that are holding the chrome cup-holder trim in place.

Some people have used a LEGO tool to reach down in there and push both clips rearward to pop the trim up. I used a small metal pick tool.

Make sure the center console lid is open. Then, work your fingers under the edge until you can lift the trim off. This is where you will likely lose the green clips that everyone has previously mentioned. Not much you can do about it.

Once you get the trim off, you will see what we mean. My green clips fell off and down into the console. They attach to the upper rear of the cup-holder trim.

They fell down into this damn hole! Retrieving them will have to wait until later.

Removing the cup-holders: The cup-holders are held in place with six (6) Philips screws. Remove them and set aside to reuse later.

The rear four (4) screws also hold the sliding cover in place. Lift it up and forward and it will slide out of the console with a firm pull. Then, get your meat hooks under the rear sides of the cup-holder themselves and pull up with some effort to free the old, boring cup-holders.

And they are out! Now you can get down in there and find your two green clips. One of mine slid under the rear AC duct.

Once you find them both green clips, pop them back on the cup-holder trim piece. Make sure they are on all the way.

Disconnect the cup-holder light wiring (a simple clip squeeze release) harness. The cup-holder plug was snapped into the console and required prying up and off the plastic base to remove.

Power Test: Start the car and made sure headlights were on to test the new cup-holders. Test the heating and cooling settings for both sides.

Closing it up: Putting it all back together is just a reverse of the disassembly. One piece of advice, when you put the cup-holder trim back on, press the front in first. Here is the final product!

Both sides operate independently and can cool or heat. Turning them off is easy as pressing the mode that is running. So, if it cooling, press Cool again to turn them off.

Yes, I plagiarized the hell out of this from another forum. Sue me.

That is pretty cool.

Is there a Challenger version of these available?

2fast4u said:
Is there a Challenger version of these available?
Click to expand...
Not from the factory. Unfortunately the Charger cup holders and Challenger cup holders are not the same configuration so it is Charger only so far. They came standard in my 2013 Daytona and it was the first mod I made in my 2016 HC.

Finally a solution to keep my beer cold on those long drives!

Great job! A mod that I've been wanting to do as well!

Any advice for 2017 Charger Hellcats? I see a different part number when I look at the 2017 Chrysler 300 part (5PF37DX9AA). Looks like it has an air duct that ties to the A/C air duct that runs under the console. Did yours have that? 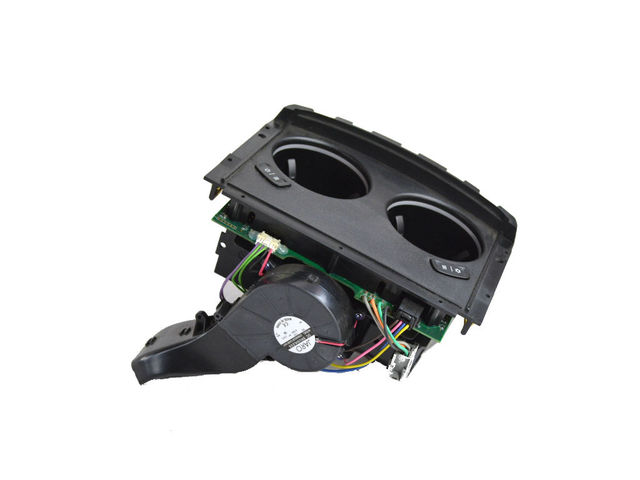 JamesU said:
Any advice for 2017 Charger Hellcats? I see a different part number when I look at the 2017 Chrysler 300 part (5PF37DX9AA). Looks like it has an air duct that ties to the A/C air duct that runs under the console. Did yours have that?
View attachment 5235
Click to expand...
I would google 1PB67DX9AD). That is the p/n for the one I used. As far as that duct, It’s just an air intake and fan assembly that gets air near the floor from the side of the console next to the driver’s seat.There is actually a bump out or notch on the bottom side of the console to keep the console side from being tight against the carpet. It does not get cold from the A/C. It has it’s own coils or something like coils to make the metal cup holders hot or cold. It works whether the A/C is on or not.
Last edited: Oct 24, 2019
OP

JamesU said:
Any advice for 2017 Charger Hellcats? I see a different part number when I look at the 2017 Chrysler 300 part (5PF37DX9AA). Looks like it has an air duct that ties to the A/C air duct that runs under the console. Did yours have that?
View attachment 5235
Click to expand...
Yes, mine looks exactly like the picture.

Thanks for posting this write up. Been missing these from my 2012 RT and was considering making the add.

No eating or drinking allowed in my cars.... none... nobody.

That would never work for me... I'm fat.

Paladin06 said:
No eating or drinking allowed in my cars.... none... nobody.
Click to expand...
Except I do drink coffee (on a long drive).

Nice write up. Definitely one feature I do miss from my 300SRT.

Tagged for the Wiki with a Bookmark
5

Does it do a good job of keeping drinks cold? I may have to look into doing this mod.
OP

504Octane said:
Does it do a good job of keeping drinks cold? I may have to look into doing this mod.
Click to expand...
I think it does.