I am going to try both sets of tires in Houston when in neg DA.

Also when you look at the numbers it does not look that bad. But I was expecting more based on the conditions.
Click to expand...
Trying both will give you a good data point but looking at the raw numbers it's super close.

I am going to try both sets of tires in Houston when in neg DA.

Also when you look at the numbers it does not look that bad. But I was expecting more based on the conditions.

Mike Jesse said:
Ron...
I stumbled on some info from the people at Mac Fab bead lock conversions.
They recommend double bead locks when using Hoosier radials. Why? It has a much lighter built carcass than
M/T's which can get by with singles.
My thoughts are if using the Hoosier, run the doubles or nothing at all. Running the singles will help stabilize only one
side of the tire. The other side is still free to wrap up or paddle.
These heavy cars are very hard on sidewalls.
Might be worth a call and talk to these people, they have a wealth of knowledge in the radial world.

Click to expand...
I don't run bead locks. I am looking for the best possible stock times. So a bead lock is out of the picture.

DRAGRCR said:
I don't run bead locks. I am looking for the best possible stock times. So a bead lock is out of the picture.
Click to expand...
You could always have a bead lock put on the inside and nobody would know. 😎 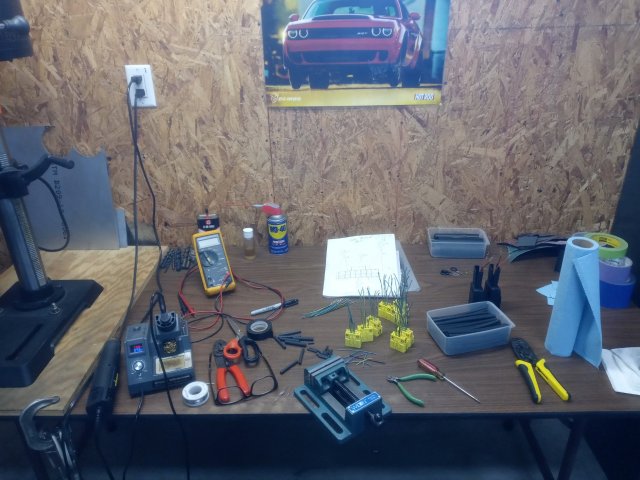 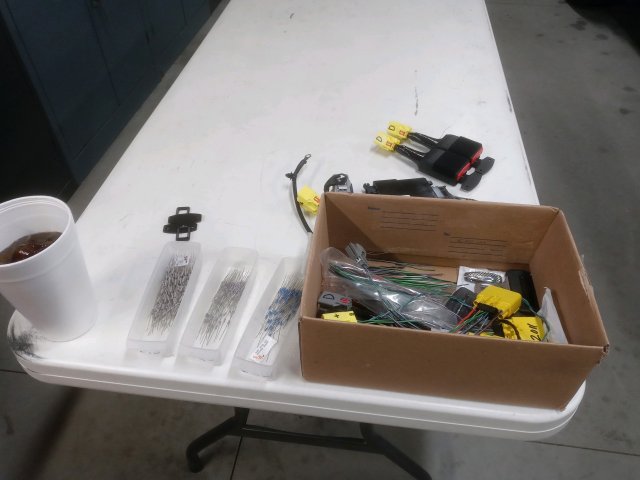 Super good weather and assumed DA. The track did not hold up. So not one good pass as the DA fell gosh darn it. BUT, pass one and two right at 5PM when they started were excellent. 6.10 on the very first pass. I'll take that. Tomorrow the track should be on point. They promised! 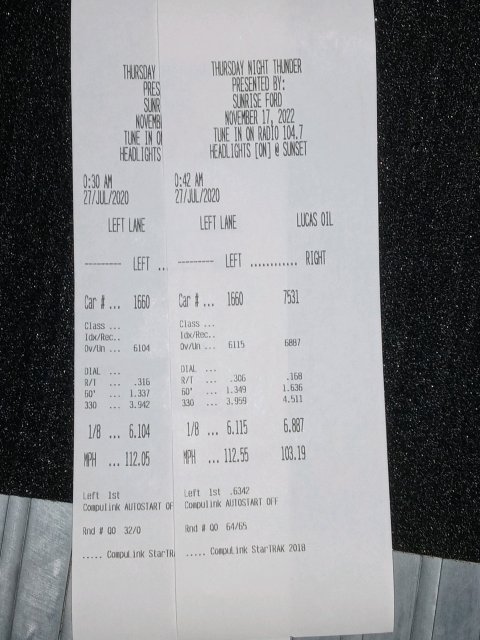 OK, so I WAS able to run 114 in the left lane in worse DA(I think). But with a much better prepped track at the time. So there you have it. Stock Demon running 114 and 115 in positive DA in the 1/8th. I will go through the time slips and post a couple when I get home......I was also trying a new fuel mix and since the track was not prepped that good on Friday it was really hard to tell any huge difference. I will look up the DA at the time and maybe get some insight as to the difference. They are BOTH good but not sure which one is better........

Made passes 3 days in a row at Irwindale. I learned some things and unfortunately the prep on Friday night was lacking. That is when the best DA was, of course.


So, I was trying to improve my PB and I was trying different fuels and I finally data logged a Demon for the first time. I was thinking it was a mistake because it will cause me to worry about low fuel level. I have run stock Demon out of fuel while making passes MANY times. Just surging on the big end mostly when I know it is low. But it literally has for the most part made its best passes on the pass before it runs out. Has never hurt anything.......... But now I am blending fuel at a higher ratio than ever before and I am thinking the motor might run lean. So, I had decided to run more fuel than usual from now on. But once again the car contradicts. On Sat morning I was in a situation where I started out with plenty of fuel but had issues with not getting a time slip and pulled some strings to jump back in and make another pass. The car was low on fuel and made its highest MPH ever in the 1/8th. I don't think any stock Demon has ever done this. It was even heat soaked and in higher DA. 115 MPH.

Fuel I was running an Ethanol blend and also a Methanol blend.
Methanol wins because it did the same ET and better speeds at worse DA. I will say that the Methanol was mixed at a higher ratio though.

Data Logging. Son of a bitch the fuel pressure does drop when the tank is low. And it does not even have to be running out. It was dropping on that 115 pass. Another contradiction. So, now that I have taken that last bit of tactful weight out of the car, I have decided to run more fuel in it. More like 1/4 tank. Or maybe a little more if I am doing a six pack (3 passes in a row without stopping). I also found out I might have shot myself in the foot. With that weight out, the car might start regularly clipping the rev limiter when I get in negative DA. So the TALLER tires will make the trip to Houston in January. The logs show the hiccups and I did get one clean run where the RPM hit 6440 on the 2-3 shift without a hiccup. In negative DA the car likely would have had a hiccup. But, MAYBE not with better prep. 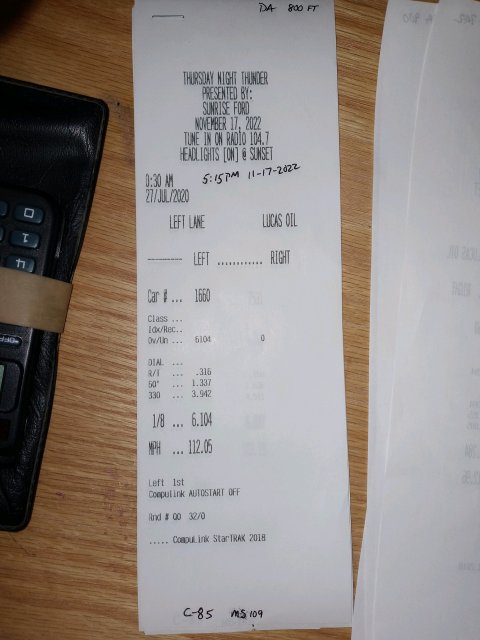 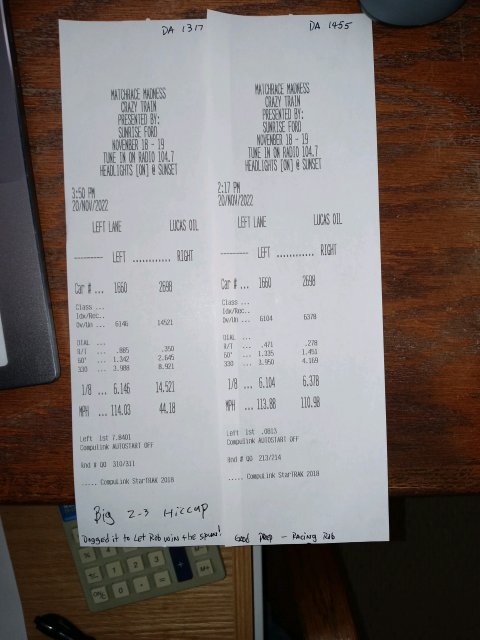 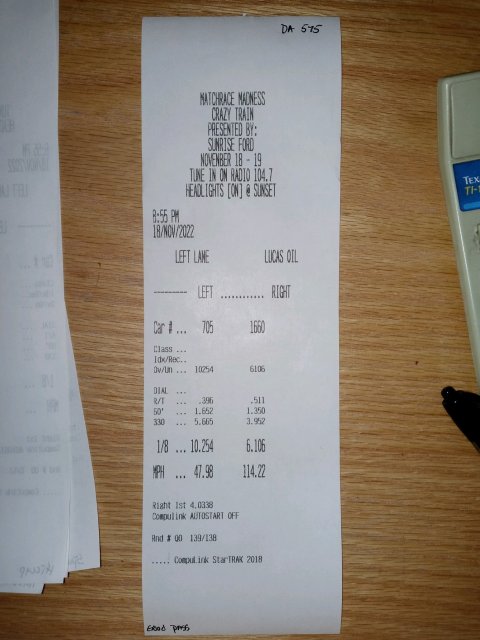 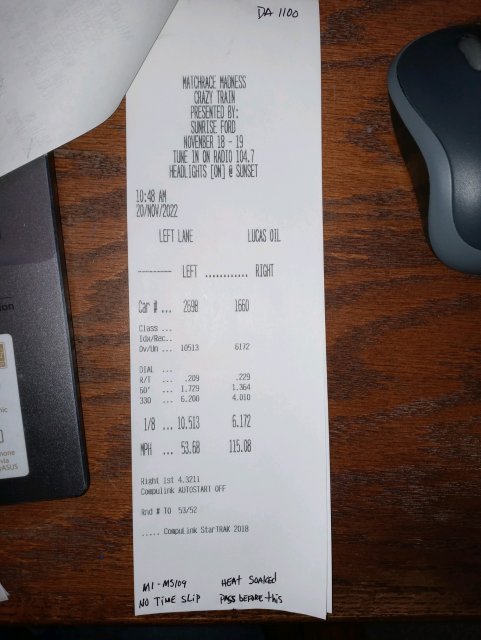