Emblems (the lack of)

I'm not a fan of rebadging what's already the top dog in a vehicle's lineup. People in the know fully understand what a cat logo on the side means. Now, that doesn't mean the look of the car can't be improved. My biggest complaint on the 15-18 HC Challengers was that they looked like plain old Challengers of any nondescript trim level unless you got a good look at the hood. No special body graphics or anything other than the tiny SRT logo on the spoiler and the logo on the side and front grille. Again, most "car people" will know instantly what it is. At least the 19-20 has the new style hood which really sticks out.

But to separate it out from the herd, it could do with a side stripe or something. I bought this one for mine: 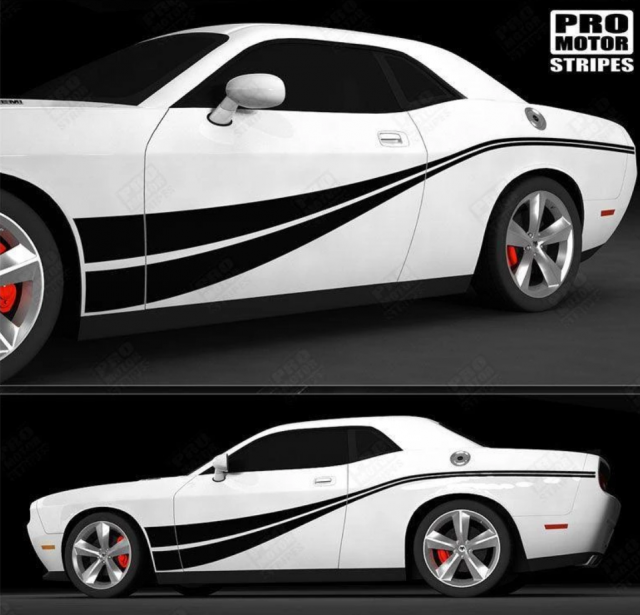 However, I elected to not go through with actually putting it on (yet). I tack fit a section of it to see how it would look, and you really can't see it on my car that well. The deep purple of the Hellraisin really makes a satin black stripe kinda disappear. That and I love the color as-is, and I'm not convinced that the above would add anything to the look of the car really.

Everyone does the giant SRT Hellcat logo billboard graphic or some similar style of large image near or over the rear wheel. I don't like to copycat (pun intended) so, I won't do the same. At some point I'll either design a custom graphic or find a unique one to try out. Until then, I'm sticking with a nekkid side.

B5Cat16 said:
I just feel that something needs to be on the hood. Nothing big but there's lots of real estate up there and a subtle emblem would accent it perfectly. Even the early 70's Challengers had emblems on their hoods.
Click to expand...
The supercharged engine on the hood would look OK. Also it was on the original Hellcat press cars.
2019 Challenger Redeye Stock with drag pak wheel and tire setup PB 10.172@132.95
OP

Emblems/decals on 4 out of 5. I still feel that the HC hood needs something. IMO, it actually looks incomplete. It's such a cool hood but needs just a bit more to finish it. At this point, "Supercharged" is my choice but I'll give it a little more time......

You mean that Ram Air hood's not stock!?

About 35 years ago I almost bought a 455 SD T/A in fireball orange color that this guy had at his gas station. Would have taken a lot of reconditioning, but the mechanicals were all there, good, and original. sometimes wish I'd bought cheaper booze and and that car, instead of expensive booze.

Considered these for a while, but didn't think they would look good in CF which would mean having to re-do the OE dual stripes in matte black to match.
The area that says 'name' can be SRT, Challenger, Dodge, Hellcat or just blank.